On Saturday 23rd October 1943 at 5:30 pm after a four-day voyage from Bizerte in Tunisia, 19 CCS (Casualty Clearing Station) arrived in Taranto. At 10:00 am the following morning the unit commenced unloading: some were to travel the 220 Km or so to Foggia by road, the main body of troops and stores by train.

One recurring feature of the descriptions about Allied army life in the Italian Campaign is the forced communal living as part of a fighting unit. Some writers, such as Spike Milligan (Mussolini – His part In My Downfall), revelled in it and were bereft when it ended for them. Others, such as Eric Newby (Love and War in the Apenines) and Dan Billany (The Cage), found it far less agreeable. Up until he joined his unit in Sfax, Tunisia, Patrick Maybin’s war had allowed him substantial time for intellectual solitude: on army bases in England where he had time to read widely and write poetry; at the Military Hospital Inveraray in Scotland after his service on the Hospital Ship St Andrew; and even during his six weeks at the reinforcement camp in the cork forest near Philippeville (Skikda) in Algeria.

The revocation of his privacy and much of his personal time over his first three weeks with 19 CCS must have come as a shock. Its effects resulted in him being admitted to 70 General Hospital in a one-time sanatorium about 5 Km outside Taranto.

Fortunately this was only temporary, an despite everything he experienced subsequently, never reoccurred. Of his nine days in 70 General Hospital, he simply wrote:

We’ve been working very hard, which is interesting but rather exhausting after my 3 months holiday – hence the rather sombre quality of this letter, coupled with the fact that I’ve been a little overwhelmed by first contact with war in earnest. However, I’m coming up for air now, and return rapidly to normal.

Taranto today still has its docks, naval base and extensive industrial areas. These are on the west side of the city’s inland sea, the Mare Piccolo.  The Old Town is located on an island at the mouth of the Mare Piccolo, and dates from the first millennium. On the mainland to the south east is the New Town, which was planned and built from the nineteenth century onwards.

On a dull Monday lunchtime in early April I flew into Brindisi airport.  It was silent and almost empty, and by the time I had walked the five minutes to the open air car park I was on my own.

I was hoping to have a neat little Alfa Romeo for my journey: just within my budget and very practical for both motorways and congested towns. In their generosity, Europcar provided me with a VW people carrier. I took a deep breath, loaded my minimal luggage, and set off.

Knowing little of Taranto I aimed for the biggest square nearest the centre.  My 80 Km drive took me through nondescript flat and slightly rolling countryside across the heel of Italy.  There were no significant hills and few noticeable trees.  I wondered whether perhaps this was simply a consequence of being on a motorway.

Nearer Taranto, the landscape became drabber.  The motorway into the city was edged by scrubland.  Driving across the bridge over the Mare Piccolo my view was largely obscured by the motorway barriers.  And then I was in Taranto itself, a potentially stressful drive through city streets averted by the absence of any significant level of other traffic.

I parked in Giardini Piazza Garibaldi and faced the first of many Italian motoring challenges: where could I pay to park? I discovered that in Taranto this question did not have a straightforward answer for a newcomer. In the end a handful of euros in the hands of a scruffy young man ensured that I was ushered into the one available space ahead of a couple of other drivers, with the implication that my car would be well looked after until my return. 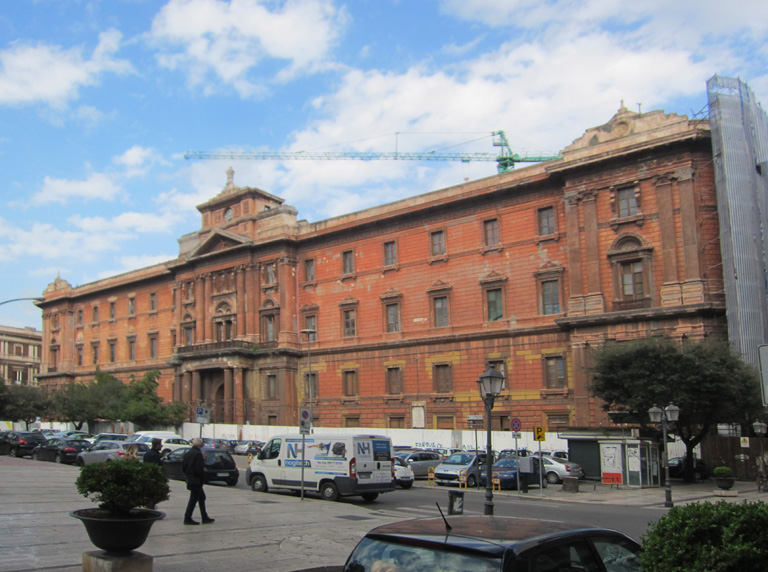 The most significant building in the New Town is in the Giardini Piazza Garibaldi, where I had parked. The Palazzo del Governo’s rust-red façade lowers over the square, as was no doubt intended by its Mussolini-era creator. Perhaps symbolically reflecting both the fate of Italian fascism and also the predicament of Taranto itself, this once-proud building now appears dilapidated and in a state of perpetual renovation.

Near the square is a highly rated archaeological museum.  With more time I would have visited it.

Elsewhere in the New Town, the shopping on offer reflected Taranto’s status as a provincial capital, but it had an incompleteness about it that perhaps resulted from the relative poverty of the region and a population that has declined by about 20% over the past four decades.  Around half the shops were closed for Monday.  The streets were quiet, apart from a few small groups of schoolchildren on their way home, crowding round little cafés and ice cream parlours.

The ancient Old Town could be picturesque but for its pervasive atmosphere of poverty and resignation. Within it run numerous shabby alleys whose emptiness is belied by clothes drying on lines wherever you look upwards. It would feel edgy, except that any energy to do harm has long been spent.

It does not take much research to discover the cause of this. Taranto is the most polluted city in Western Europe. Its steel plant alone produces 8.8% of the total dioxins emitted in Europe, as well as large amounts of carbon dioxide and carbon monoxide. Local schools sometimes have to be closed because of this pollution. Cancer rates are 15% above the national average. Livestock are not allowed to graze within 20 Km of the steel plant, and indeed on driving northwards the landscape had the same wasted appearance as the city itself.

But often in the drabbest of places some people will make an effort. Several parts of the Old Town are decorated by bright, imaginative, murals. I liked these so much that I’ve used a selection of these as a header for this blog.

The railway station is located in the docks and industrial area on the mainland to the west of the Old Town. It’s from here that Patrick Maybin would probably have travelled on Tuesday 2nd November 1943 to re-join his unit – and the war itself – in Foggia.

My departure from Foggia

The SS7 road that leads northwards to the main A14 autostrada that traverses the east side of Italy as far as Bologna begins in the docks and industrial area below Taranto’s railway station, just over the bridge from the Old Town. This was the real start of my journey, but it presented two challenges: where were the signposts, and which roads were one-way?

I took a guess that fortuitously was correct, and was safely on my way. 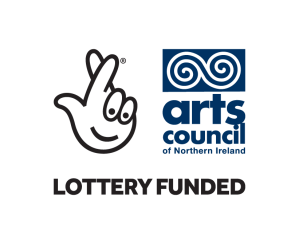