The city of Campobasso is located in the foothills of the southern Apennine Mountains, about 70 Km inland from Termoli. Like Foggia, few outside Italy have heard of it. But also like Foggia, it’s a provincial capital. Its name comes from its location, on the ‘low field’ below the Castello Monforte fortress, which rises some further 90 metres (300 feet) above it.

The city was captured early on 14th October 1943 by the 1st Canadian Division; by the end of that month they had taken the area surrounding it. The battle secured a key part of the east to west route across Italy from Termoli to Cassino. However, it also destroyed many of the city’s public buildings, including many built in the previous two decades by the fascist government.

Patrick Maybin described the city shortly after his arrival there at the end of January 1944:

… we’re very high up in the hills – a moderately large town, new and old quarters, the old part as usual built steeply up a hill. On all sides are high mountain ranges topped with snow. The air is so clear one is conscious of it. The old town is the usual picturesque slum with one or two churches with very Papish interiors – nothing remarkable. The new town is well built, and has several of the Fascists’ large new buildings – some blocks of flats quite good.

His time there appears to have been quiet. At the end of February he wrote that his unit hadn’t done any real work for over a month. The fighting at Monte Cassino was still some 100 Km to the west, and news of the battles was only filtering through slowly. In March 1944, the eruption of Vesuvius was 100 Km away to the south across mountains 2,000 metres (nearly 7,000 feet) high. It doesn’t appear to have affected the city, as he mentions its aftermath only in passing in a later diary entry.

The city itself was still recovering from the fighting. Patrick Maybin remarked on how the corruption of the defeated fascist government together with pitifully low wages led to a climate of bribery and a thriving black market, and how the diversion of resources to support the advancing armies was testing the civilian community to the utmost.

My route to Campobasso

I drove to Campobasso from Termoli on the SS647 state highway. Most of the way this follows the River Biferno, which was crossed near the sea in the Battle of Termoli. The route rises from the plains at the coast, through hilly country, and into the foothills of the Apennines. It crosses the River Biferno in both directions in about twenty places: indeed for several kilometres it actually runs through the Lake Guardialfiera reservoir on a viaduct, the bases of its supports immersed in the water below.

The weather became cooler and mistier as I drove further into the mountains. Eventually by late morning I arrived in Campobasso. This time my strategy of heading for the main square in the New Town turned out to be far less effective than in Taranto: the area was pedestrianised and around it the streets were packed with parked cars. It took a full half hour to find a parking place for my own car.

Campobasso’s New Town was developed in the nineteenth and twentieth centuries.  It has many good examples of early twentieth century public architecture, including some from the fascist era. However, my interest in it was dampened by the mild but persistent drizzle that had started to fall: what we in Ireland might call soft weather. And as on the previous day in Termoli, it proved impossible to find anywhere to eat a weekend lunch after 1pm. So I made my way slowly to the Old Town where my bed and breakfast was located.

The Old Town is adjacent to the New Town, no more than ten minutes walk away.  Its narrow streets and confusing alleyways cluster round the base of the hill of the Castello Monforte. My room was in a disused palace, which sounds far grander and far more expensive than it actually was.

By evening the thoroughfares of the Old Town were almost empty and lit with yellowing lamps, accentuating their medieval origin. There wasn’t a single Italian restaurant open, but I eventually managed to eat at a small German beer cellar: hardly a local experience, but no less welcome.

I had limited time – just under 24 hours – in Campobasso, and so the following morning I climbed to the Castello Monforte on top of the hill overlooking the city. From the castle there were wide views over the built-up areas and also beyond to the snow-covered Apennine mountains. The next stage of my journey would take me through those mountains.

The Apennines, from the Castello Monforte fortress

On 13th March 1944, the following notice appeared in 19 CCS’s daily orders.  it solicited ideas for how best a casualty clearing station should be laid out in tents on flat open ground.  For the first time since they were in North Africa, it looked like 19 CCS would be back out in the open air. 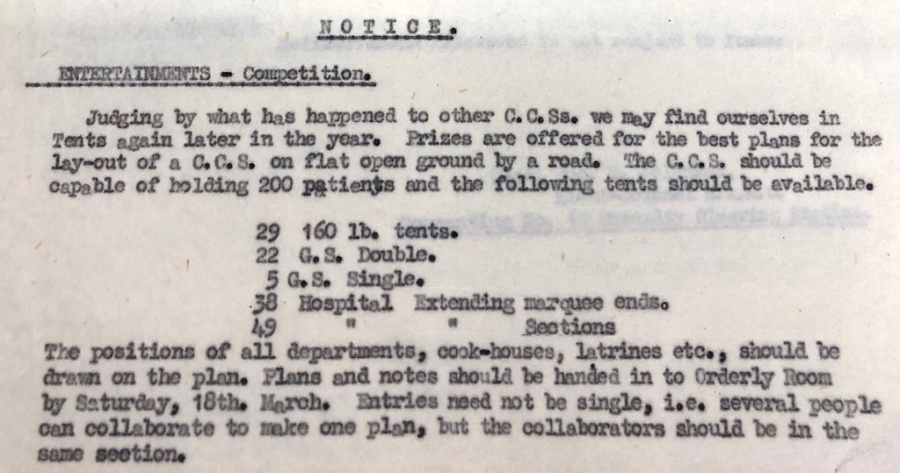 On 22nd March, 19 CCS moved on to Presenzano, where the US Fifth Army was headquartered for the Battle of Monte Cassino.  Patrick Maybin stayed behind in Campobasso for a while, officially to look after the nurses:

I had quite a good time – most of it, other people were looking after the Sisters, so I had a holiday – a pleasant Italian town high in the mountains – breakfast at nine, lazy mornings, walks into the hills over the snow, cinemas, tea dances, rather riotous dinner parties at the local Officers Leave Hotel. However a week was enough, and I wasn’t sorry to rejoin the C.C.S.

A week after most of the unit moved he followed 19 CCS to Presenzano.