Patrick Maybin arrived on Saturday 14th November, around five weeks after the capture of Termoli. By that stage the Allies were crossing the River Sangro some 50 Km to the north-west. Just beyond the Sangro, the cold, rain and mud of winter would stall any further advance until the spring. Patrick Maybin was to spend almost eleven weeks in Termoli, including Christmas 1943. 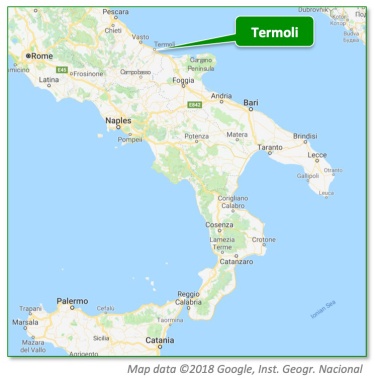 Termoli is situated on the Adriatic coast, just under 100 Km north-west of Foggia. On 3rd October 1943, Allied special forces and marine commandos landed overnight in torrential rain.  By 8am they had captured the town. Despite a formidable German counterattack over the next three days, the force held out until 6th October when the main British advance reached the town.

The early and quick capture of Termoli gained a valuable harbour for the Allies’ supply routes. It also accelerated the Allied advance up the Adriatic coast.

19 CCS was based in a seminary next to Piazza Sant’ Antonio, a square that now has the town hall on one side and on the other wide views over the sea and Termoli old town.

Just over five minutes’ walk away the Caffè Bella Vista near the station was used for regular distributions of cigarettes and special distributions of food. The unit baths were also located near Termoli Station.

The War Diary for 19 CCS in Termoli includes orders covering the buying of alcohol by its individual members.  Only wine served in restaurants at lunch and dinner times was permitted.  Off sales of wine and any purchases of spirits were forbidden.  Wine from Foggia was to be avoided entirely following the theft of supplies there that had been contaminated with diphosgene.  Coming up to Christmas a strong message was issued forbidding drunkenness and misbehaviour on public streets.

Other preoccupations included army vehicle damage to telegraph poles (and hence communications), discipline in saluting when out and about in the town, and the small number of troops attending church services.  In early December all the barber shops in the town had to be placed out of bounds until they had been inspected because of the risk of skin infections and lice.  Civilian accidents with petrol were also a problem, as some military personnel were selling it to them on the black market.

A couple of weeks after arriving, Patrick Maybin wrote:

What more can I say on this confined space? I’m working quite hard, and in spite of my rather gloomy letters, happier than I’ve been for a long time. Our chief hardship here is lack of news – there’s only about one wireless in the town – and of course all papers are two months old. “8th Army News” doesn’t reach us at present. (I sent you a copy.) Books are rare … Rumours are plentiful – nearly all easily enough discounted at sight!

In late December he described a typical night shift:

The time is 2.30 a.m. (its my night on duty – one in four) the place my department – the pre-operation ward. At dusk this afternoon, the ambulance convoys appeared in the twisting, crowded, muddy streets of this little town, and with grinding gears drew up one after another at the C.C.S. door. All evening the usual routine of sorting out patients and disposing of them to the proper places (we call this “triage” – it sounds better than sorting), went on. The latest arrived soon after midnight, and I don’t expect many more before dawn; chaos is reduced to order, the surgeon is hard at work in his theatre, and my patients lie in a neat row on stretcher trestles, all suitably X-rayed, diagnosed, dressed, and resuscitated (another nice army word) as required, waiting their turn for his attention. Half of them are sound asleep already, overcome with the luxury of lying in dry blankets on a stretcher out of sound of the guns (the battle has receded from us since I wrote last, so that we don’t hear even the heavy guns in the distance.)

At Christmas, four days of leave was offered for pairs of men to visit Naples, though by mid January an outbreak of typhus meant that the city was now out of bounds to off-duty staff.

By that time, the influx of injuries was abating. Patrick Maybin wrote:

Our work has slackened off for the moment, and I find myself wishing we were busy again – conditions prevent any coherent reading and I find myself wishing we were busy again – I’ve no private life whatever. But even with the lull in fighting there were civilian injuries to be tended: A short time ago I had an Italian youngster of 10 brought in – land mine casualty, arm blown off, compound fractures both legs, eyes blown out, face pulped. Fortunately he died in spite of all the resources of modern science. I don’t know whether Vickers or Krupp made the mine. This happens quite often, children being so curious about strange objects in the fields.

Termoli today is now far larger than in 1943: the original fishing port with its old castle and walled town has expanded inland and it feels more like a small city. It’s become a destination for Italian tourists from the surrounding provinces, though not from outside Italy: I saw few if any non-Italians there. It is still as monocultural and monolingual as Foggia, though the effect of this is diluted by the presence of so many from outside the town.

I arrived on a sunny Friday afternoon in mid April, and soon found the seminary where Patrick Maybin had worked. From my guesthouse it was a five minute walk to the end of the main shopping street, Corso Nazionale, which runs from the town’s large main square down to the sea near Piazza Sant’ Antonio.

Corso Nazionale is wide and pedestrianised. It feels laid-back with relaxed-looking people ambling between the cafés and shops, and buskers strumming guitars. Beyond its end lie the castle and old town, on a point overlooking the harbour. 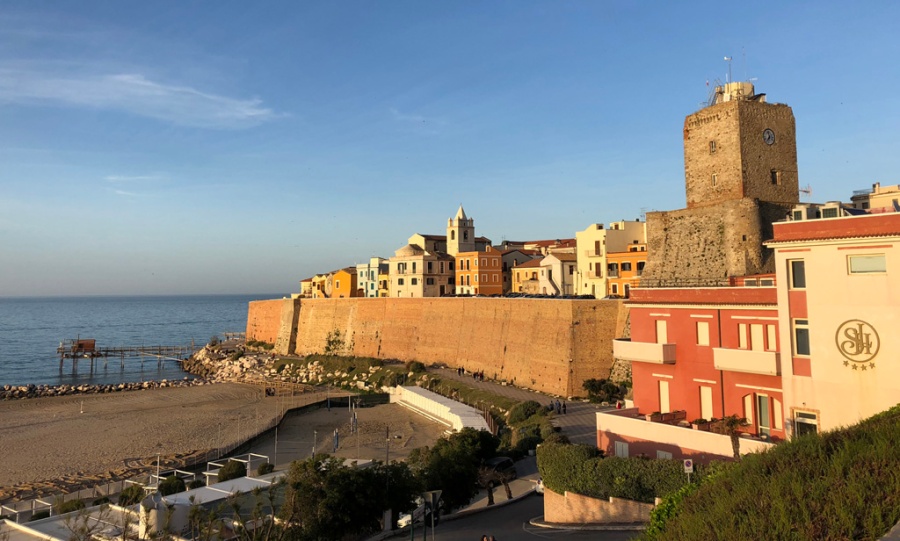 The Castle and Old Town, from near Piazza Sant’ Antonio

The streets of the old town are narrow and twisty; the old town includes the narrowest alley in Italy, A Rejecelle, at just 38cm (15 inches) wide.

On the other side of the northern end of Corso Nazionale, a long sandy beach extends to the west.

On the Saturday morning, Corso Nazionale was busy: the whole world seemed to be outside enjoying themselves. But at 1pm my impression that the town was fully cosmopolitan was rudely corrected when I attempted to find a restaurant for lunch. By then the streets were largely empty and all the restaurants were full or already booked: the only available places were in cafés and patisseries. I clearly still had much to learn.

I also found my almost nonexistent Italian combined with the almost complete lack of any English in the town was a challenge: not for practical matters, as the friendliness of everyone I met there always overcame communication barriers for day-to-day needs. But talking with people who were interested in my journey and project could be frustrating. My landlady’s appetite for information was so extensive that in the end we had to enlist a local waiter as interpreter to enable me to satisfy it.

The First Battle of Monte Cassino started on 17th January 1944 while Patrick Maybin was still in Termoli. Elsewhere in Italy over winter 1943-44 fighting had diminished as a result of the cold and wet weather. The focus was now to the west and on 29th January 19 CCS was on the move again, this time almost half way across Italy to Campobasso, towards Monte Cassino.